There’s nothing more frustrating than being in the middle of cooking a beautiful meal only to realize you’re out of the most essential ingredient. Sure, you could just hop in the car and head out to the grocery store, but what happens if you live 45 minutes away from the closest store?

Aside from cooking, one of the most important skills you need to have while in the kitchen is to be flexible. Flexibility comes in many forms, but for today, we’re going to talk about flexibility when it comes to recipe ingredients.

Some may argue a recipe will be ruined if you use applesauce in place of oil, but for some, it may make the dish taste better. Cooking and taste are purely subjective.

But, that does lead me to this point. By using different ingredients than what a recipe calls for may make it taste different. That could be either better or worse. Regardless, when you’re in a bind and you can’t get out to the store, substituting ingredients should help you out in a pinch.

Now not all substitutions will work, as each alternative may not be the best fit in every case, especially when you’re baking. The thing about baking is, it’s more of a science than cooking. With cooking, you can fudge around and still get great results, but baking; not so much.

When it comes to dairy, you’ll have to pay attention to the differences between the textures of each product. Some liquid dairy products will thicken or thin quicker if mixed with another type of product. For instance, if you mix milk with cornstarch, it will thicken up quicker than it would if you added it to greek yogurt.

Let’s also not forget there is a myriad of different kinds of milk out on the market today, such as but not limited to soy, almond, rice, dry, and evaporated milk. In a pinch, any of these would work as a wonderful substitution for a dish requiring milk.

Superhero Tip: If you’re going to substitute soy milk for regular milk, make sure it’s the plain variety. I wasn’t paying attention once and added “very vanilla” soy milk, instead of the plain flavor to my mashed potatoes.

Things may be different when you start to talk about cheese. Since there are so many varieties of cheese, whether it be hard, semi-soft, or aged cheese, they each have different melting points.

Have you ever noticed a difference between melting a hunk of cheddar cheese and swiss cheese? The swiss cheese melts smoothly, while the cheddar is rather lumpy. Although swiss and cheddar cheeses’ technically fall within the same class of cheese, they should melt the same, but they don’t. I would advise against substituting swiss with cheddar.

With this said, when you’re substituting a different type of cheese in a recipe, you’ll have to be cognizant of the texture of the cheese. For best results, you can always substitute the same cheese within the same class:

Butter is probably one of these easiest items to overlook in your fridge, but thank heavens there are many other oils and fats you can use as a substitute. Most people may lean towards margarine as a substitute, but I’ve found shortening to work the best, as the consistency is closer to butter, especially if you’re baking.

Make sure to grab my complete list of over 70 different ingredient substitutions, that I’ve compiled over the years.

If you’re out of fats or liquid oil, this can be a little complicated as each type of oil has a separate smoke point. If you’re unfamiliar with what a smoke point is, it’s just a fancy term for the burning point at which the temperature of an oil or fat begins to produce smoke. Once the oil is heated past its smoke point, it generates toxic fumes. With this said, you’ll have to be very careful when substituting liquid oils and fats.

There are three types of liquid oils and fats. You shouldn’t have a problem with substitution if you’re substituting each oil or fat from within the same category.

Having plenty of bouillon cubes or powder is always a great substitution for stock, and it’s something all kitchens should keep as a pantry staple.

Superhero Tip: The seasoning packets inside Raman noodles can be used as a substitute for stock.

If you don’t have any stock, bouillon cubes, or even seasoning packets from Raman noodles, you can substitute the stock with water and soy sauce. Mind you, soy sauce is very salty, so you’ll want to add a little bit at a time.

Remember, ingredient substitutions should be used in case of a cooking emergency. You shouldn’t make a habit out of using the substitutions as some may not perform as well as the correct ingredients.

STOP BLAMING YOUR FRIDGE FOR NOT KEEPING YOUR FOOD FRESH Are you tired of spending oodles of money on food storage systems that don't work? What would you say if I told you all you needed were some simple & actionable storage guidelines for keeping your refrigerated food fresh? Intrigued?

Download your refrigerated food storage guide, along with the 9 genius ways to keep your food fresh.

It's time to stop wasting money throwing away food that spoiled before you were able to eat it.

Hi There! I'm Stacey. I'm so happy you stopped by. The purpose of Food Safety Superhero is to help you keep a safe, happy, and healthy kitchen. The kitchen is the heart of every household and it's so important to keep our family healthy & safe at all times. Since the kitchen is the most pivotal location in our homes, it's the one we must ensure is clean and safe. Food Safety Superhero provides food safety, kitchen safety, kitchen cleaning & disinfection tips, as well as, food storage solutions. One of the most important aspects of keeping a clean kitchen is to ensure the food we feed our family is safe and free from any foodborne pathogens. I love my kitchen. Can you say the same thing about yours? If not, together we can make your kitchen one of your most favorite and safest rooms in your home. 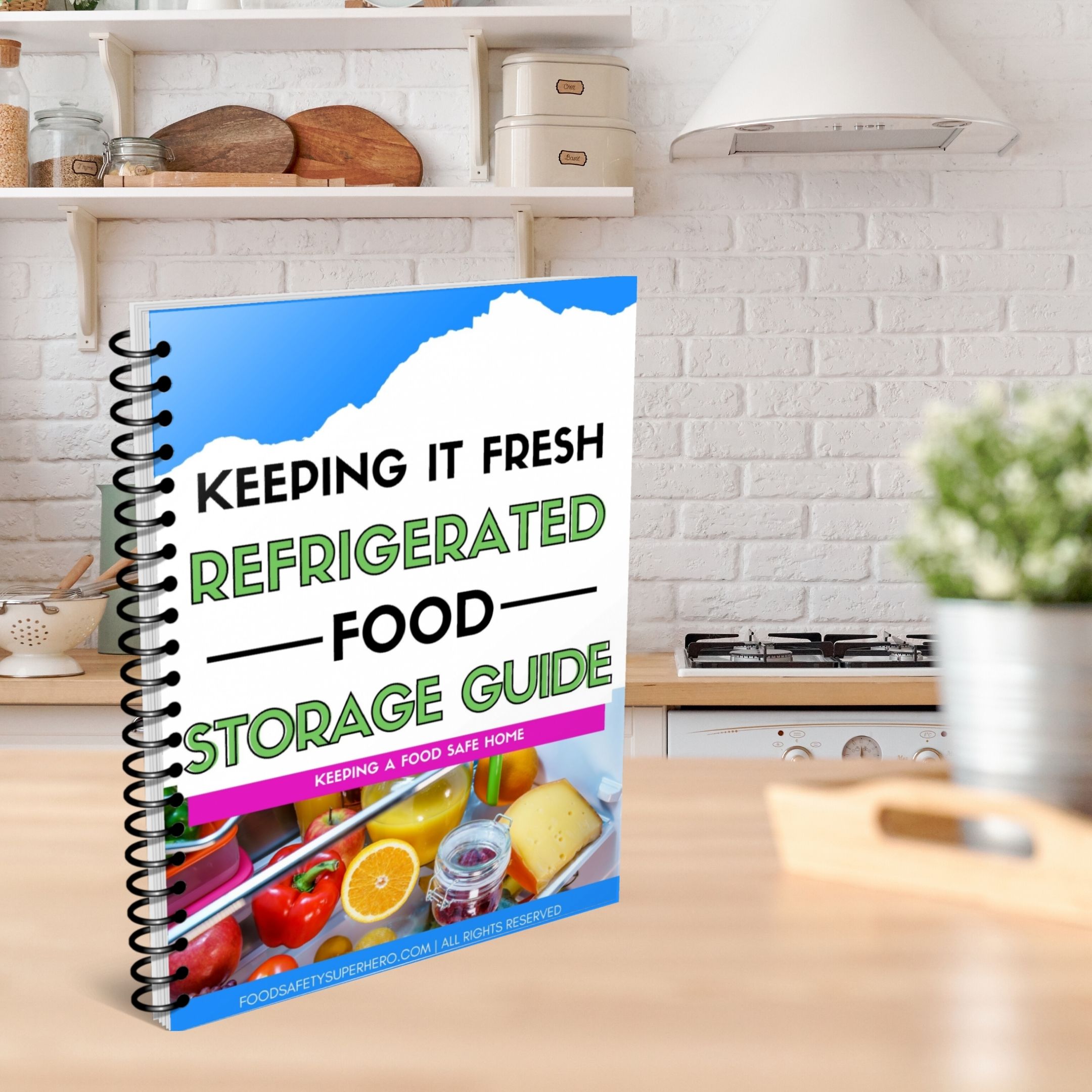 The best way to preserve your food is by utilizing proper food storage techniques. This guide is your secret weapon to keeping your food fresh, even if you don't eat it right away!

Please log in again. The login page will open in a new tab. After logging in you can close it and return to this page.

STOP BLAMING YOUR FRIDGE FOR NOT KEEPING YOUR FOOD FRESH

Are you tired of spending oodles of money on food storage systems that don't work? What would you say if I told you all you needed were some simple & actionable storage guidelines for keeping your refrigerated items fresh? Intrigued?

Download your refrigerated food storage guide, along with the 9 genius ways to keep your food fresh. It's time to stop wasting money throwing away food that spoiled before you were able to eat it.