Have you ever looked away from your child for a split second when you were preparing dinner to find them licking the raw steak you were getting ready to cook? Did your stomach turn to mush? Did you freak out so badly, you called 9-1-1, poison control and your Pediatrician all at the same time?

If so, you’re not alone. If this happens, please don’t freak out to the point you think your child is going to die and needs to be rushed to the closest Emergency Department, put immediately on IV fluids and life support. Yes, it is possible for your kids going to get a bad case of food poisoning from licking the raw steak, but then again, they may not.

Once you’re told little Abigail or Joey will be okay and give you directions on how to proceed, I want you to calm down, hug that little stinker and tell him or her the steak is poo-poo and not to do it again.

Food poisoning or the stomach virus

Deciphering the difference between food poisoning and the stomach virus can be complicated at times. Both ailments are very close with regard to symptoms. I know you’re under a ton of stress when your kiddo is puking and has diarrhea and you’re struggling to figure out if they have the stomach bug or food poisoning. I’ve been there and totally know how stressful it is.

The best thing you can do is not freak out. Unless you keep your kid in a bubble, there’s always a good chance they’re gonna get a stomach virus. That in itself is pretty much unpreventable; however, by taking proper precautions and knowing what to look for you can prevent food poisoning.

When my oldest son was 3, he ate 1 moldy Entenmann’s doughnut. Now, mind you the doughnut he had eaten had just started to grow mold. I noticed the little speck and was about to throw them out, but I got distracted when my youngest was crying from his crib.

When I came back to the kitchen and saw he ate the doughnut, I freaked out big time. I called 9-1-1, my Pediatrician, and the Poison Control Center all at the same time.

Okay, the part about calling all 3 is a dramatic fabrication. I couldn’t have called them all at one time since back in the late 80’s only the really rich people had cell phones. I had a landline phone with push buttons and a really long cord. I didn’t even have call-waiting.

Who do you think I called first? My Pediatrician, Poison Control or 9-1-1?

Naturally, I called poison control because at the time it happened I knew my Pediatrician’s office was closed for lunch.

I spoke to a lovely woman by the name of Vivian who told me to contact my pediatrician. Gee, thanks Viv, why didn’t I think of that? I can’t believe I actually remembered her name after 30 years. He also ate an entire box of Pepto Bismol chewable tablets, but I’ll leave that story for another day.

Here’s the deal. Children under the age of 5 are at an increased risk for food-borne illness and related health complications. This is due to their immune system still developing and they can’t fight infections as well as older children and adults.

It happens. Little kids love to put everything in their mouths. How many times has your child found a fish stick under the kitchen table, you may have either been too lazy to pick up at the time, or overlooked. Once explosive diarrhea erupted you realized something has gone awry.

There are a lot of things we all take for granted, and food safety for kids is one of them. Sure, we all cut up our kid’s food into smaller bite-sized portions so they won’t choke, but there are a few not so obvious things we may overlook unintentionally.

Hey, I’m not here to judge, I’ve been guilty of most of these when my boys were young.

How to prevent food poisoning in children.

According to the CDC children under the age of 5 should avoid the following foods.

I used to put raw eggs in my oldest son’s milk bottle. How I wish I could bitch-slap my younger self.

If you feed raw or partially cooked eggs to a child with a compromised immune system (they could be getting a cold), they’re more likely to be exposed to Salmonella.

Salmonella is not life-threatening. If you don’t seek medical treatment, the stomach cramps, nausea, diarrhea, vomiting headaches, and fever should go away within a week.

It will be one of the messiest weeks of your life.

Here’s a health tip for you!

You should refrigerate eggs as soon as you get home and use them within 3 weeks from the day you purchased them. Anything longer than that. TOSS THEM OUT! I don’t care if the expiration date is out another 2 weeks. TOSS THEM OUT.

If it would make you feel better throwing them at a nasty neighbor, then do it…only kidding…maybe.

The only life form that should drink unpasteurized milk is a calf. I’m not going to get started on the reasons why I don’t feel a young child should drink milk. I don’t care how earthy-crunchy you are, keep your kids away from anything that is unpasteurized!

So, what’s the deal between unpasteurized and pasteurized?

Pasteurization is a process that kills the harmful bacteria in milk by heating it to a specific temperature for an extended period of time.

There is no difference from a nutritional standpoint if the milk is unpasteurized or pasteurized. Read the labels. If it doesn’t say “pasteurized” then consider it as raw milk.

When an animal is slaughtered, there is a possibility the intestines will be nicked and the parasites or harmful microorganisms that live in the animal’s digestive tract could leak out. This can contaminate the other meat that was being processed or packaged.

Ground beef has a higher concentration of microorganisms than other cuts because they grind meat from several different cows to make up each batch.

Chickens and pigs have different microorganisms. By consuming all three raw, there’s more of an occurrence of E. Coli than any other food-borne illness.

Some fish contain mercury. Make sure to choose fish that has a low mercury level such as Flounder, Tilapia, Salmon, Pollock, Trout, and Catfish.

You may be asking, can I give my child under 5 sushi? Sushi from a Japanese restaurant is kept at a level of coolness that will inhibit the growth of potentially dangerous bacteria,

As a rule of thumb, don’t give it to a child under 5. It’s better to be safe than sorry.

Sprouts, whether it be alfalfa, broccoli, clover, radish or mung bean have a high concentration of salmonella and E. Coli. The reason for this is the seeds and beans need warm and humid conditions to sprout and grow. These conditions make it an ideal spot for colonies of bacteria spores to grow, plus some farmers use cow manure.

Just the thought of that makes me never want to eat another bean sprout again, how about you?

Out of everything I mentioned, honey which seems to be the most harmless is actually the worst one of the bunch. Wait until your child is over the age of 1 before introducing honey into their diet.

The reason honey gets such a bad rap is, it can harbor toxic levels of bacterial spores that can cause botulism. See, bees are not cute, regardless of how you look at them.

It’s always wise to take a walk on the cautious side when you’re feeding your child at any age, but specifically when they’re under 5 years old.

It’s funny, as parents if our kids come down with a bad case of diarrhea or vomiting we first think they caught a stomach bug from someone or the shopping cart from Target. What we never really think of is, the food we’re giving them may be the culprit.

Images by Alexander Dummer photography and Pixabay retrieved from Pexels

Previous Post: « The Unbiased Truth About Sanitizing Cutting Boards
Next Post: How To Avoid Accidentally Giving Your Baby Food Poisoning » 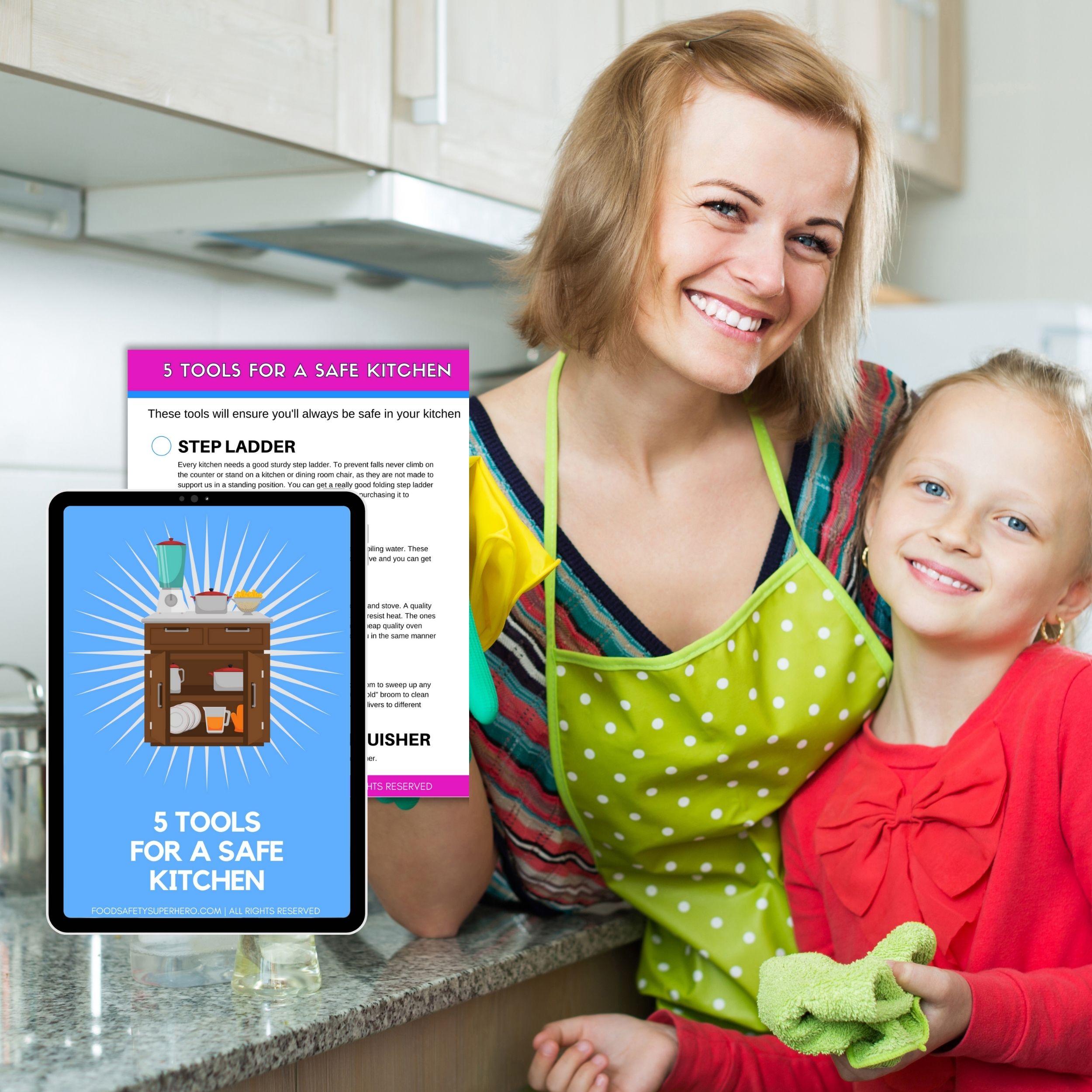